Andrew II.
Andrew became the legal ruler in 1205.
Andrew II. was born in 1177 as a child of Béla III. és Anna Châtillon. He could not get the Hungarian throne as a second child, but his father helped him in 1188 in the Halych throne, where he was ousted in 1190. Imre became the king of Hungary after the death of his father, Béla III. Andrew repeatedly rebbled but his attemts failed. During this period he married Gertrude of Merania, the daugther of the Istrian sergant and 5 childern were born by this marriage: Maria in 1203/1204, the later IV.Béla king in 1206, the later Saint Elisabeth in 1207, Kálmán in 1208 and Andrew in 1210. After the death of Imre, and his son László III., Andrew became the legal ruler in 1205. Due to the economical and political renaissance of the Meranians the Hungarian nobleman turned against the queen because her blatant favoritism towards her German kinsmen and courtiers. On September 23, 1213, when Andrew fought for Halych, Gertud of Merania was killed by Peter count, Bánk Bán and his son in law, Simon. In 1211 Andrew II. relocate the German Knight Order into Barca to help his Eastern expansion policy. In 1214 he crowned his first born, 8 years old son, Béla IV. as king. In 1215 Andrew got married again, his second wife was Yolanda Courtenay, the daugther of Peter Courtenay, the earl of Auxerre and Namuri. Yolanda junior, the sixth child of Andrew was born by this marriage. 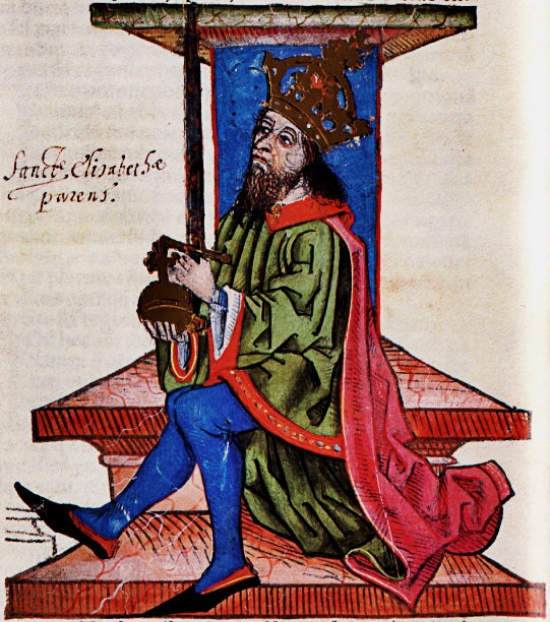 In 1217, Andras was the only one in Central Europe to launch a crusade. 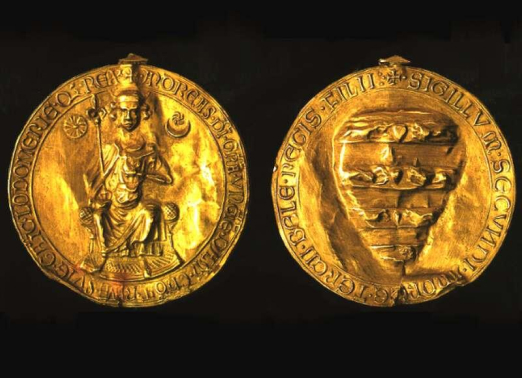 In 1217, Andras was the only one in Central Europe to launch a crusade. In July 1216, the newly elected Pope Honorius III called upon Andrew to fulfill his father's vow to lead a crusade. Andrew, who had postponed the crusade at least three times finally agreed in 1217. Andrew sold and mortgaged royal estates to finance his campaign, which became part of the Fifth Crusade. Andrew decided to return home at the very beginning of 1218 , even though Raoul of Merencourt, Latin Patriarch of Jerusalem, threatened him with excommunication. Andrew was in massive debt because of his crusade, which forced him to impose extraordinarily high taxes and debase coinage. Andrew issued the Golden Bull in 1222, which seemed to be a major turning point in the king's economic and personal policy, but only in 1231 commits himself to apply it due to clerical pressure. The Golden Bull is commonly compared with England's Magna Carta — a similar charter which was sealed a few years earlier in 1215. Andrew got married again for the third time at the age of 55, only one year after the death of his second wife. He married the 23 years old Beatrice d’Este, the daughter of Este marquis. After the king’s death she fled the country. As a last political movement of Andrew he stormed down with his military campaign until Vienna, after Duke Frederic II., the Austrian prince attacked Hungary. At the end Frederick II. redeemed peace with money. Andrew II. after his 30 years of reign died on September 21., 1235 and was buried in Egres Abbey. During his reign there have been major changes in the country: the transformation of the estate system, the emergence of a new agricultural production structure, the development of regular taxes and contributions collected in cash, the appearance of the money exchange fee, the boom in issuing diplomas, and the decentralization of coinage.

Andrew issued the Golden Bull in 1222.